Anti-Fascism, Jihadism and The FLA

The Football Lads Alliance (FLA) march in London last Saturday, saw large crowds (estimated between 5,000 to 20,000) gathered to protest Islamic extremism. The stated aim, at least from the organisers, was to demand the arrest, internment and or deportation of 23,000 ‘extremists’ without trial. 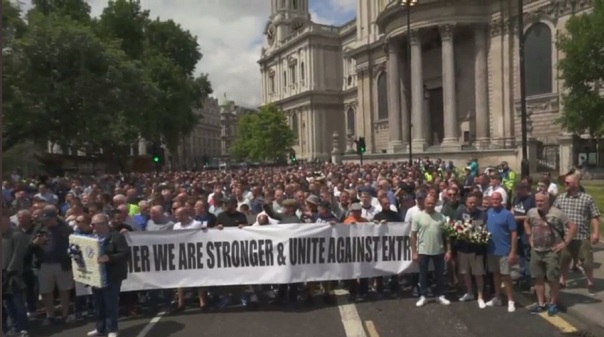 The FLA preparing to march.

END_OF_DOCUMENT_TOKEN_TO_BE_REPLACED

Cable Street and Beyond

On the 4th October 1936 , tens of thousands of anti-fascists turned out to stop Moseley’s Blackshirts marching into the East End of London.

Barricades during the “Battle of Cable Street”

END_OF_DOCUMENT_TOKEN_TO_BE_REPLACED

It’s The End Of The World As We Know It

The last few days have sometimes felt a bit like the end of the world, or at the very least, the beginning of a new era. Trump’s ascendancy seems to have sparked a new wave of repression and resistance, and the far-right across both the US and Europe is on the march.

END_OF_DOCUMENT_TOKEN_TO_BE_REPLACED

Fascists: Should We Just Ignore Them?

A few days ago, Brighton and Hove News published this article. It’s an interview with Matthew Cook, one of the organisers of this year’s Kemp Town Carnival. In it, Mr Cook argues we should ignore the planned fascist march in Brighton, and leave it to the Police to deal with, whilst we all party it up at the carnival.

Since “just ignore them” is a fairly common message we get sent, we thought we’d look in a little bit of depth at why this is such a bad idea.

END_OF_DOCUMENT_TOKEN_TO_BE_REPLACED

Today is the International Day of Solidarity with Antifascist Prisoners, called for by New York City Antifa. Their callout states:

Antifascists fight against those who—in the government or in the streets—dream of imposing their fascist and other Far Right nationalist nightmares on the rest of us. Throughout the world, Islamophobic, anti-Semitic, anti-immigrant, and racist bigotries are on the rise. Antifas are on the frontline in confronting these reactionary politics, and we will not forget our comrades imprisoned in the course of this struggle.

The AFN is one of the groups supporting this callout, alongside antifascists from as far afield as Finland, Sweden, Australia and the US (full list of supporting groups below).

As part of the Antifascist Network, Brighton Antifascists have enhusiastically taken up the call for solidarity actions.

END_OF_DOCUMENT_TOKEN_TO_BE_REPLACED

… Go out in the midday sun.

Today self-publicist Eddie Stampton’s attempt to intimidate the Jewish community of Golder’s Green degenerated into an at-times painfully hilarious farce. Around two dozen hardcore neo-nazis (half of them Polish immigrants) where marched into a pen, inside a cage, inside another pen, opposite Downing Street, to attempt to “de-jewify” Britain.

In what looked depressingly like an episode of American History X-Factor, each of the boneheads took a turn on the mic, trying to wow an increasingly hostile antifascist crowd with renditions of such classics as “It was the Jews what done it” and “You’re all agents of ZOG”. Particularly of note was White Supremacist Piers Mellor’s rousing chorus of “Hordes from the East”, delivered with all the rhetorical flair of depressed Dalek. A special shout-out should go to Kevin Layzell, but we think it would be unfair to make him cry twice in one day.

Farce became pantomime when the batteries in Eddie’s microphone ran flat, rendering the rest of the speeches inaudible. Ever heard of Duracell Eddie? Or are they a Zionist plot?

Finally reduced to taunting the assembled antifascists with a pork pie, the fascists were marched off under heavy manners into Westminster tube. A Nuremburg rally. it was not, which begs why he mainstream media found it all so interesting. In the end, it was more Benny Hill than Leni Riefenstahl.

Yesterday was the EDL’s national demonstration in Oxford. After bottling it in Brighton, they were relying on having a good day to retain some credibility. Unfortunately for them, that’s not exactly what happened.

The pitiful EDL turnout, around 150

END_OF_DOCUMENT_TOKEN_TO_BE_REPLACED

Roundup of a Crazy Weekend

This weekend has been very busy for antifascists around the country, with many demonstrations and some interesting (and worrying!) developments.

First off, SS wannabes National Action staged a “White Man March” in Newcastle. North East Antifascists, alongside London Antifascists and many other autonomous groups, confronted them and made sure they had a real shit time. Chants such as “Hitler was right!”, plus burning an LGBT and Israeli flag, got 9 of them (ie half of their demo) nicked for racial hatred. It ended with around 20 idiots standing protected by dozens of police, sieg heiling to an empty street. Well done guys, that was a major victory for the white race /sarcasm.

END_OF_DOCUMENT_TOKEN_TO_BE_REPLACED

Phew, what a night!

Last night, Brighton Antifascists had a very successful benefit gig in the Cowley Club, Brighton’s premier radical social center. Negative Measures and Teef from Brighton and Damaged Head and Harda Tider all the way from Sweden played for an audience of easily 100 enthusiastic punks.

END_OF_DOCUMENT_TOKEN_TO_BE_REPLACED

Anyone who’s been keeping an eye on the growth of the far-right in Europe over the last year can’t help but have noticed “Pegida” (Patriotic Europeans Against the Islamification of Europe), a German group who have been marching every week for several months, drawing many thousand supporters in their home city of Dresden.

Attempts to take the Pegida format beyond Dresden have been somewhat underwhelming. Low numbers and large antifascist counter-protests have dogged their demonstrations in cities like Cologne, Hannover and Berlin. With the creation of Pegida groups outside of Germany, this pattern of failure has only continued, with their attempt at marching in Malmö, Sweden, hilariously outnumbered. 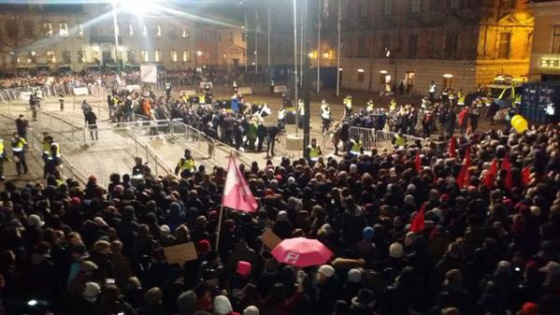 30 Pigeda clowns outnumbered by around 3000 antifascists in Malmö, Sweden.