← Mad ZOGs and Englishmen…
Migrant Solidarity Night and Other Updates →

Today is the International Day of Solidarity with Antifascist Prisoners, called for by New York City Antifa. Their callout states:

Antifascists fight against those who—in the government or in the streets—dream of imposing their fascist and other Far Right nationalist nightmares on the rest of us. Throughout the world, Islamophobic, anti-Semitic, anti-immigrant, and racist bigotries are on the rise. Antifas are on the frontline in confronting these reactionary politics, and we will not forget our comrades imprisoned in the course of this struggle.

The AFN is one of the groups supporting this callout, alongside antifascists from as far afield as Finland, Sweden, Australia and the US (full list of supporting groups below).

As part of the Antifascist Network, Brighton Antifascists have enhusiastically taken up the call for solidarity actions. 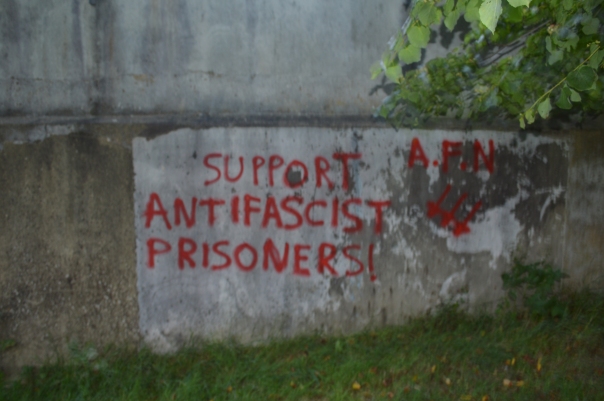 [Update 7/12]Roman Bogdan was arrested on April 15, 2015, as part of the long-going state repression of anti-fascists in Brest, stemming from a fight between anti-fascists and fascists on May 8, 2013. Roman is facing up to ten years in prison on charges of aggravated bodily harm.

Dzmitry Stsyashenka was arrested on October 4, 2013, for his alleged involvement in a fight between antifascists and neo-Nazis in Brest on May 8, 2013, that sent one Nazi to the hospital. He is also accused of another fight with neo-Nazis during the summer of 2013. He was sentenced to four years in prison, but in 2014 his term was reduced by one year due to an amnesty.

Dzmitry Zvan’ko was arrested for his alleged involvement in a fight between anti-fascists and neo-Nazis in Brest on May 8, 2013, that sent one Nazi to the hospital. He was arrested the next day, along with four other people, in a police raid on the homes of known anti-fascists. Dzmitry filed a complaint to the prosecutor about psychological and physical abuse while in custody. He was accused of malicious group hooliganism and serious bodily assault and faced up to ten years of prison. Dzmitry was found guilty and sentenced to five years of prison, but after paying off about 4,000 euro in damages he was granted amnesty, which has reduced his term by one year.

Jock Palfreeman is an Australian anti-fascist political prisoner serving a twenty-year prison sentence in Bulgaria for the rather mysterious death of a neo-Nazi football hooligan who was part of a group attacking two Romani men in Sofia, Bulgaria in 2007. Jock came to the aid of the Romani, and quickly found himself the focus of the attack. Bulgarian authorities did everything they could to ensure that Jock did not receive a fair trial, and after his sentencing have refused–in contravention of their own treaties–to transfer him to Australia to serve the rest of his time closer to his family. Jock wants donations for him sent to the Bulgarian Prisoners’ Association, which he is part of.

He can read English and Bulgarian.

Aleksandr Kolchenko was arrested in Crimea on May 17, 2014, along with several others, and accused by Russian authorities of participation in a “terrorist group” which planned explosions near the Eternal Fire memorial and the Lenin monument in Simferopol, as well as having sabotaged railway tracks and electricity lines. Aleksandr is also alleged to have carried out two arson attacks in April: against the headquarters of the Russian Unity-Party, and the Russian Community of Crimea. He was transferred to Moscow and is being kept in draconian conditions. His lawyers are under a gag order, and have been refused elementary rights to defend him. He faces fifteen-to-twenty years in a labor camp.

Russian authorities claim that Aleksandr is a member of Right Sektor, a Ukrainian ultra-right nationalist organization, but he has no connection to the group—a fact confirmed by relatives and friends. Moreover, Aleksandr is an antifascist and anarchist who consistently opposed nationalistic movements in Crimea and faced constant fascist attacks for his activism. For example, after a film screening about murdered anti-fascist journalist Anastasiya Baburova, he was attacked by thirty Nazis with knives.

Since this case is highly political, Aleksandr’s legal costs are high, around 850 euro per month. The investigation has created a heavy financial strain on local ABC groups, and there is a call for financial support and information distribution. You can make donations via PayPal to abc-msk@riseup.net or using a bank account (write to the same e-mail address for details).

Address:
Please note that Aleksandr is currently being moved to a different prison in Rostov. We are waiting to confirm his new address.

Alexey Sutuga is a longtime anarchist and anti-fascist who was arrested in April 5, 2014, for a fight with members of the ultra right in Moscow. He was sentenced on September 30, 2014, to three years and one month in prison for his alleged involvement in the fight.

However, this sentence comes in the context of an earlier case from April 2012, when he was arrested for allegedly taking part in a fight at a punk/hardcore concert in Moscow on December 17, 2011. The conflict began after club security, consisting of members of the far right, provoked guests. The concert was stopped prematurely because of the fight, but the security then attempted to take some of the audience hostage and threatened to call their nationalist football hooligan friends in reprisal. The audience members resisted and the club security opened fire with rubber coated metal bullets. However, the club security was neutralized and sent to the hospital. The case against Alexey and several others was eventually dropped in January 2014 on the eve of the Sochi Winter Olympics as part of the amnesty bill, approved as a PR stunt on initiative of Vladimir Putin.

Please note: Moscow ABC advises that letters in English are seldom accepted in Russian prisons, so please write only in Russian (try using a translation program), or just send photos and postcards.

Joel Almgren was sentenced to five years and six months for defending a local community-organized anti-racist demonstration in Stockholm against a brutal Nazi attack on December 15, 2013. The peaceful protest—against fascist assaults on local anti-racists and the dissemination of Nazi propaganda in area schools—was attacked with knives, sticks, and glass bottles by the most militant Nazi group in Sweden. Anti-fascists at the scene defended the demonstration from the attack and many were injured themselves.

Joel has over 4080 USD in fines, and his supporters are asking for help raising the money. The group can be contacted at the web site below.

He can read Swedish and English.

Linus Soinjoki was charged and convicted for actions related to his involvement in the anti-fascist movement in Sweden. He was given fourteen months in prison and began serving his sentence in mid-May 2015.

Linus can read Swedish and English.

Address:
[Update 7/12]We have received news that Linus would rather people contact a Swedish Antifa support page, Föreningen fånggruppen, for his address if people are interested in writing to him.

On New Year’s Eve of 2013, Luke O’Donovan attended a house party in Reynoldstown, a neighborhood in Atlanta, Georgia. Luke was seen dancing with and kissing other men at the party. Later in the night he was insulted with homophobic slurs, and attacked by several people at once. Luke unsuccessfully attempted to escape, at which point several witnesses reported watching between five and twelve men ganging-up on Luke and stomping on his head and body, evidently with the intent to kill him. He was called a faggot before and during the attack, throughout the course of which he and five others were stabbed. Luke was subsequently imprisoned and charged with five counts of aggravated assault with a deadly weapon as well as one count of attempted murder.

Luke’s trial concluded on August 12, 2014, when he accepted a negotiated plea deal. He agreed to a two year sentence beginning that day, and then eight years of harsh probation. The judge also banished Luke from the state of Georgia for the term of his probation.

He can read English.

Jason Hammond accepted a non-cooperating guilty plea and was sentenced to forty-one months on January 2015 for his part in an organized direct action taken against a group of white supremacists.

In 2012, a group of racists and white supremacists organized a White Nationalist Economic Summit in the Chicago suburb of Tinley Park. Groups of anti-fascists and anti-racists from the Midwest confronted the meeting and successfully shut down the event through a righteous melee. In the aftermath, five antifascists were arrested, and dubbed the Tinley Park 5. The five were sentenced to upwards of three years and all have since been released. Jason was arrested later, and is the last person still in jail for this action.

He can read English.

The full list of groups supporting today’s action is as follows:

If you’re interested in getting involved in more Prisoner Solidarity activism, get involved with Brighton ABC

← Mad ZOGs and Englishmen…
Migrant Solidarity Night and Other Updates →