Roundup of a Crazy Weekend

This weekend has been very busy for antifascists around the country, with many demonstrations and some interesting (and worrying!) developments.

First off, SS wannabes National Action staged a “White Man March” in Newcastle. North East Antifascists, alongside London Antifascists and many other autonomous groups, confronted them and made sure they had a real shit time. Chants such as “Hitler was right!”, plus burning an LGBT and Israeli flag, got 9 of them (ie half of their demo) nicked for racial hatred. It ended with around 20 idiots standing protected by dozens of police, sieg heiling to an empty street. Well done guys, that was a major victory for the white race /sarcasm.

It would also appear not everyone was happy with NA’s performance on the pavement.

In funnier news, appears that north of the border, in Edinburgh, PEGIDA UK only managed to pull 4 people to their demo outside the Scottish Parliament, opposed by around 200 antifascists.

In London, Brighton Antifascists, North London Antifascists and several autonomous groups attended the large M21 demo against racism and fascism. After handing out hundreds of fliers for upcoming antifascist mobilisations, we ran into 15 Britain First fascists, attempting to hold a “flash demo” against the UAF. After a frank exchange of views, BF were relieved of a Union Jack Flag (promptly burned) and their banner (kept as a trophy). Also their dignity. BF leader Paul Goldfish was reduced to yelling “ANTI-BRITISH TRAITORS!” over and over again from behind several police lines. 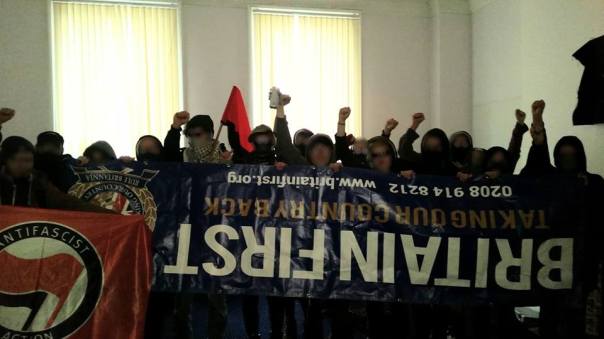 Antifascists with the seized BF banner.

Now for the bad news. It appears that Tory MP Afzal Amin has been involved in a plot with the EDL to rig the vote in Dudley during the upcoming elections in May. In return for the EDL’s co-operation in calling a fake demo he promised to be their “unshakeable ally” in Parliament. Obviously this is incredible and dangerous. The EDL have very little credibility in the UK at the moment, and they must not be allowed to gain any through Parliamentary support. It is also clear from the leaked audio transcripts that Tommy Robinson, despite “quitting” the EDL in October ’13, still very much calls the shots within the organisation.

Just as worrying, but in a different way, is last night’s anti-Semitic attack on a synagogue in Stamford Hill, North London. This is exactly where Joshua Bonehill planned his “anti Jewification” march. While it is too early to say what happened, it is clear that anti-Semitic neo-Nazi types around the UK have gained courage from Bonehill’s lunatic ravings, and the actions of fascist groups like National Action. This should be a further call to arms for militant antifascists to force these people off the streets.

On that note, there are two large antifascist mobilisations coming up, both on the 4th April. The EDL will be attempting to march in Oxford, while PEGIDA UK, fresh from their failure in Edinburgh, will be attempting a rally in Central London.

See you on the streets, comrades!