Opposing the EDL in Dudley – reports and thoughts

Antifascist Network report and thoughts about the Dudley demo. 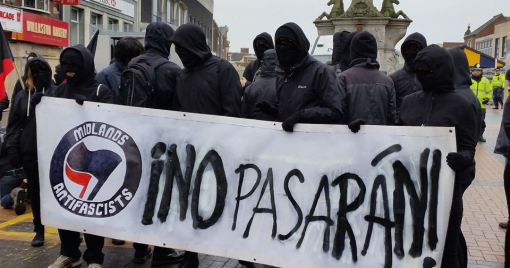 Some brief reports and thoughts from Dudley at the weekend.

Local and national media mostly seem to be repeating the police’s figures of 600 EDL and 50 anti-fascists. There are some divergences from this. Some media organisations estimated up to 1000 EDL. The UAF stated there were “several hundred” at their counter-demonstration to the EDL.

Midlands Anti-Fascists who called for a counter-mobilisation to the EDL reported:

“We didn’t have the best of days yesterday, with 27 Antifa being locked up for the day as a preventative measure. However, absolute solidarity to Berkshire Anti-Fascists, North London Anti-Fascists and Brighton Anti-Fascists for travelling up to support us. Yesterday we saw the fash protected by the police and the UAF stand around having their jolly as usual completely away from the EDL. Don’t believe the hype, it might have been reported that a militant wing of the UAF split off from the unity…

Posted on February 9, 2015, in Uncategorized. Bookmark the permalink. Leave a comment.