MOBS AND COPPERS ..an anti-fascist day out by the seaside. by Schnews

“One guy went straight over the barricade into them – he was knocked down but everyone followed and soon the fascists were hiding behind the police” – eyewitness account of the the arrival of the South East Alliance into the March for England pen.

Another year, another March for England, another victory for the anti-fascist massive. Around 100-150 dregs of the EDL with the assistance of 700 police to march 400 yards along a cordoned off seafront and back. Turn-out against the march was huge with an estimated 2,000 counter-protestors turning out inside the police organised cordon re-inforced with a 200 strong black block roaming around the perimeter.

Photos (see below) of the event show the extent to which Brighton stood up for itself well against the various EDL splinter groups that make up the March for England. The far-right pulled out all the stops for this one with march organiser Dave Smeeton hitting the road to drum up support for the event. The basic message was: Last year they caught us by surprise – this year we must get the numbers and show the ‘commies’ who’s boss. Fascists travelled from around the country to be in Brighton and the day showed just how dispirited the remnants of the English Defence league are.

THEY GO WHERE WE WANT

A large number of old EDL faces were spotted on the day but the likes of Shane Calvert, Jeff Marsh and Liam Pinkham just can’t attract a following any more and are reduced to making idle threats on the internet. Fascists had promised a weekend of carnage, but in the end Jeff ‘Casuals United’ Marsh @wegowherewewant was reduced to tweeting on Saturday that the Casuals ‘totally owned Worthing’ which is a nice way of spinning the fact that they were too frightened to come fifteen miles along the coast to Brighton for the night.

Meanwhile Brighton’s anti-fascist coalition was busy building in the town itself conducting daily street stalls and plastering the place with stickers and flyposters. It was obvious by contrast that the March for England have no base in the town and no grass-roots support.

ALL BETS ARE OFF?

Sussex police claimed that they were putting in place the biggest public order operation in the force’s history and the barrier erected along the seafront was expensive but in the event nothing prevented fash and anti-fa from settling their differences.

Plod had originaly annnounced that the MfE were to be bussed into their start point from one of the train stations. In the event they were simply allowed to walk through town in small groups – unsurprisingly SchNEWS started hearing of small punch-ups erupting throughout the North and South Laines. The first real flashpoint came when groups of EDL started to get to the startpoint of their demo while waving flags. One group was immediatley chased into a bookmakers on St James St while anti-fascists fought with the police to get at them. They were only rescued by the arrival of mounted cops. Meanwhile the South East Alliance were trying to sing their way badly into the cordon while being pelted with bottles.

Eventually march organisers decided that sufficient numbers had arrived for the march to begin. The MfE began their dismal cordoned off trudge at 1p.m – realistically police presence and preparation meant that there was little chance of blocking the route. However the MfE had to run the gauntlet of 2,000 jeering opponents, comprised of trade unionists, the Unite Against Fascism crowd, the Green Party and hundreds of ordinary Brightonians.

Meanwhile groups of fash and anti-fa played hide and seek in through the South Lanes. Groups of fash were continually sent packing, retreating behind police lines. A few anti-fascists got thumped but the opposition came off far, far worse. The militant block eventually made its way to the proposed end point of the march and waited there to bait the march. This was when the hardcore racists headed up by Steve ‘Sugar Plum Fairy’ Sands, launched their ill-fated kamikaze attack. Badly disguised as black block a handful of them began throwing punches at the masked up youth but were rapidly overwhelmed and were only just rescued by police after a proper pasting.(insert your own“ got a tasty smack in the mush off the lads/ claret all over the shop” type hooooligan narrative here). By the way Sands has pent the last two years bragging on facebook about ambushing anti-fascists during a 2010 demo in Brighton…best served cold eh?

The fash were marched back to the start point and police organised coaches began to arrive to cart them off to less fashionable parts of the country. A few hundred antis remained to see them on their way but the majority marched back through town under a rainbow flag and behind a banner marked ‘No Pasaran’. No cordons, no police, with the chant “Whose streets, our streets” ringing true. One particiapant told SchNEWS “This was a moment of true Brighton unity – we didn’t need cops to protect or facilitate our march because this is our town”. Video link

The above does not represent the whole story of the day which was often confusing and fragmentary with pockets and bursts of activity occurring across the whole town until late in the night. Anti-fascist coalition StopMFE have put out an appeal for accounts of the day.

Altogether thirteen anti-fascists were arrested and although arrest support was provided if you need support or think you have important witness evidence then please contact stopmfe@ymail.com 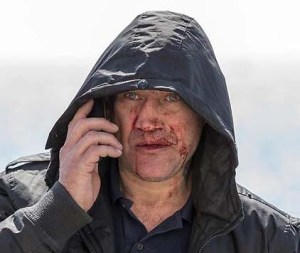 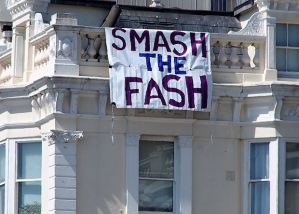