← ENGLISH DEFENCE LEAGUE: IN FOR A HYDING?
Direct action against fascism in Bristol →

It has been a dreadful weekend for Nick Griffin, the BNP, the English Defence League and the collected scrotes of the Scottish Defence League and Infidels factions. Braw! To start with Nick ‘that’s not a saveloy’ Griffin has been accused of being a ‘sex pest’ by the fragrant Claudia Dalgleish who has revealed that he sent saucy messages and exposed himself whilst eating a take-oot in the car. Ms Dalgleish was recently the partner of BNP chap Steve Squire and she had been trying to scale the dizzying heights of far right politics. However, she subsequently fell out with Mr Squire and the Griffclops for varied reasons too scandalous (and, to be honest, too tedious) to detail and in the time-honoured cliché of ‘the woman scorned’ has expressed her dissatisfaction by selling her story to the Daily Star. Crivvens! Like Mr Tommy of the EDL, Griffclops has now been condemned to sleeping in the spare room by the Mrs along with a couple of mouldy Nazi uniforms and large quantities of unused BNP membership cards. Far be it for anti-fascists to have any sympathy whatsoever with the ridiculous Griffclops but Ms Dalgleish, who appears to have been somewhat surgically inflated, seems to be a bit of an attention seeker. As the phrase goes, ‘lie down with dogs …’ etc, then this pic doesn’t do here many favours.

However, that is not going to stop us indulging in a wee bit of schadenfreude at the Griffclops’s expense!

In case you have been dead for the last week there has been much ado about the far right  demonstrating in Hyde over the recent attack on Daniel Stringer. The EDL decided to have a demo there despite being asked not to by Stringer’s family. The BNP, desperately sensing a publicity stunt, decided to piggyback it and claim it as their own despite having stated that BNP members were not allowed to play with the EDL. Recriminations subsequently flew. On the day a piss poor turnout of about 50 BNP was slightly outnumbered by the EDL. The BNPers were furious with other members for not showing up for a ‘national demo’ and the EDL were furious with the BNP for hijacking their brazen publicity stunt. Griffin was told off by plod about ‘going too far’ in his speech and they had had been worried all week but on the day the fascists were all force marched to ‘defend’ the Asda carpark and stand about wondering why on earth they all bothered. The much awaited ‘race war’ failed to ignite and after an hour or two everyone went home again feeling very disappointed indeed. 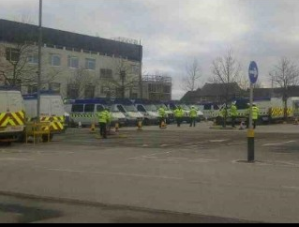 After Griffin had left the podium and was out of earshot, Mr Tommy of the EDL ordered BNP flags and placards to be removed and then nicked off to Rochdale, desperately trying to capitalise on recent disturbances there. Earlier this week a bunch of pissed hooligans attacked a takeaway because they were selling encyclopedos or something and the windows got done. Mr Tommy arrived to whip up a frenzy but no-one noticed. Later in Manchester a bunch of EDL got very mouthy with some Wrexham supporters who took umbrage and told them off in no uncertain terms! Speaking of  Association Soccer, the EDL had promised vengeance for their humiliation by Ajax fans a while back in Holland and had attempted to rally the troops on Facebook. Then realising that it is illegal to organise football violence on the internet quickly removed the statement. Luckily, our chums over on EDL News got a copy of it and posted it for all to see. And it’s here:

Whoops! Needless to say nothing happened and the EDL who are not exactly well established at either of the Manchester soccer teams were once again embarrassed.

Meanwhile, up here in Scotland the SDL had a ‘mass rally’ in Glesgae (that’s Glasgow to you, Jimmy!) and got together with the ‘chav scrotes’ of the North East and North West Infidels and together further proclaimed their support for the National Front. The very few of them gathered up in St Enoch’s Square (how appropriate) to unfurl St. George flags and sing Rule Britannia. Good one! Everyone was really impressed. Eejits. They were vastly outnumbered by anti-fascists and most passers-by just appeared confused as to who the SDL etc., were. Here’s an on-the-spot report from Glasgow anarchists:

A few more arrived hopelessly late on a coach after having got lost although the rumours were flying that they were late because of playing ’Soggy Biscuit.’ Apparently Liam ‘Dairylea’ Pinkham won!

Following last week in Liverpool when associated fascists attacked a Republican march this weekend has been a welcome boost for antifascists and a dismal one for the far-right. And finally, we are pleased to announce the arrest of the British People’s Party candidate for Todmorden this week. He seems like a reasonable chap!

And as for this handsome charmer! Crivvens! Jings! And Help Ma Boab!

PS: from an anti-fascist in the know: ‘An SDL steward pissed himself after a copper refused to let him go out the cordon to the toilet. He then went back to the copper showing said copper he’d pissed himself.’

Posted on February 29, 2012, in Analysis. Bookmark the permalink. Leave a comment.

← ENGLISH DEFENCE LEAGUE: IN FOR A HYDING?
Direct action against fascism in Bristol →